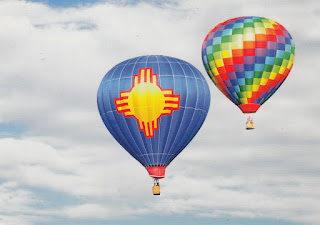 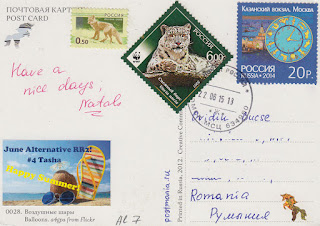 What comes in your mind when yo see such a picture? For me it's about dreaming, summer, relaxation & vivid colors. The picture was taken in October 2010 at the Albuquerque International Balloon Fiesta. On the blue balloon you can see a golden symbol of the sun. This was of great importance to all of the Native American Indian tribes. The rays of the sun signified the cardinal directions, North, South, East and West. It is the symbol of Zia people and also the flag of New Mexico state where Albuquerque is.
The card came with 3 beautiful stamps.
The 0.50 ruble (2008) shows a fox from Russian fauna. It's a part of Definitive Issues (or common) stamps.
The 6 ruble (2007) shows the snow leopard one of the endangered species protected by WWF (whose logo you can observe on the left of the stamp).
The 20 ruble (2014) is a Joint Issue with Switzerland (clock series) and depicts the clock located on the building of the Kazan railway station in Moscow, established by the architect A.V. Schusev.
The personalized sticker on the lower left corner is a very nice touch-addition to the card, also showing its source. It is a common practice among some of the forum users to personalize their sent cards.

Time spend with a friend... 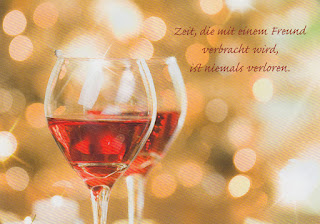 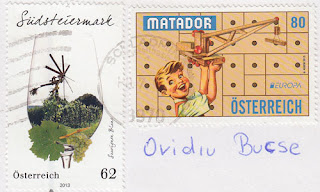 One of my favorites postcards are those related to drinks, especially red wines.
I just love this simple & beautiful picture with wise words ("Zeit, die mit einem Freund verbracht wird, ist niemals verloren"). That means "Time spent with a friend is never lost". That reminds me of another saying: The most precious gift you can give is YOUR time because you give a piece of your own life that can never be taken back.
The card came with two very lovely stamps:
The 62 Euro-Cents (2013) shows a glass of wine featuring Southern Styria, one of the Austrian Wine Regions and Sauvignon Blanc wine variety.
The 80 Euro-Cents (2015) is one of Europa stamps with Matador wooden toy construction set. 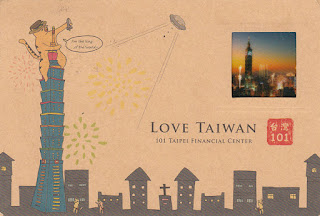 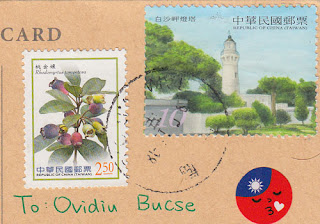 Few are the postcards that manage to be original by construction. And this one is a brilliant example. It shows Taipei World Financial Center (also known as Taipei 101) in two aspects: a childish drawing and a photography reversal film window (upper right corner). Taipei 101 is the tallest building in Taiwan (509,2 m) and held the world record of tallest building between 2004 and 2010, when it was surpassed by Burj Khalifa. The design is inspired by traditional Chinese architecture, with a shape resembling a pagoda and its specifications are based on the number "8", a lucky number in traditional Chinese culture; it features 8 upward-flaring sections, and is supported by 8 super-columns. It got the fastest elevators in the world, rising at 1010 meters per minute (60.48 km/hour) and descending at 610 m/min (36.6 km/hour). The brakes are ceramic rather than steel (as found in high-performance cars) for greater efficiency. TAIPEI is mnemonic for Technology, Art, Innovation, People, Environment, and Identity. 101 represents the concept of striving for beyond perfection.
The postcard came with two stamps:
The 2.5 $ (ND2013) shows Rhodomyrtus tomentosa shrub.
The 10 $ (ND2010) shows a white lighthouse.

Email ThisBlogThis!Share to TwitterShare to FacebookShare to Pinterest
Etichete: other places, Taiwan 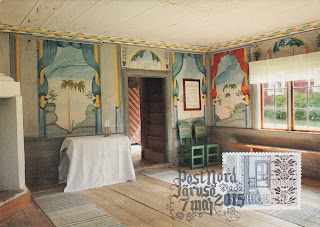 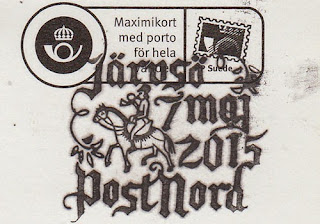 Sometimes you wonder how many pleasant things can a postcard contains.
This one, received in May Alt RR, one got so many.
Firstly, it shows a UNESCO site: Decorated Farmhouses of Hälsingland (No. 1282)
Secondly, it's a MaxiCard (issued along with other four on 7 May 2015) with nice stamp and cancellation postmark.
Then, it shows something genuine and traditional, a piece of unique history.
Farmhouses of Hälsingland were added to the World Heritage list in 2012. They are large and elaborately decorated, sometimes housing several generations, whereas some houses were used only for festivities and others for sleeping. They reflect the prosperity of independent farmers who in the 19th century used their wealth to build substantial new homes with elaborately decorated ancillary houses or suites of rooms reserved for festivities. The paintings represent a fusion of folk art with the styles favoured by the landed gentry of the time, including Baroque and Rococo.
The 5 kr stamp (2015) combines two things: The right area (where the stamp value is written) shows an interior motif taken from Bommars farmhouse and the left wallpaper area shows an interior from Gästgivars farmhouse. The design was made by Nina Ulmaja. 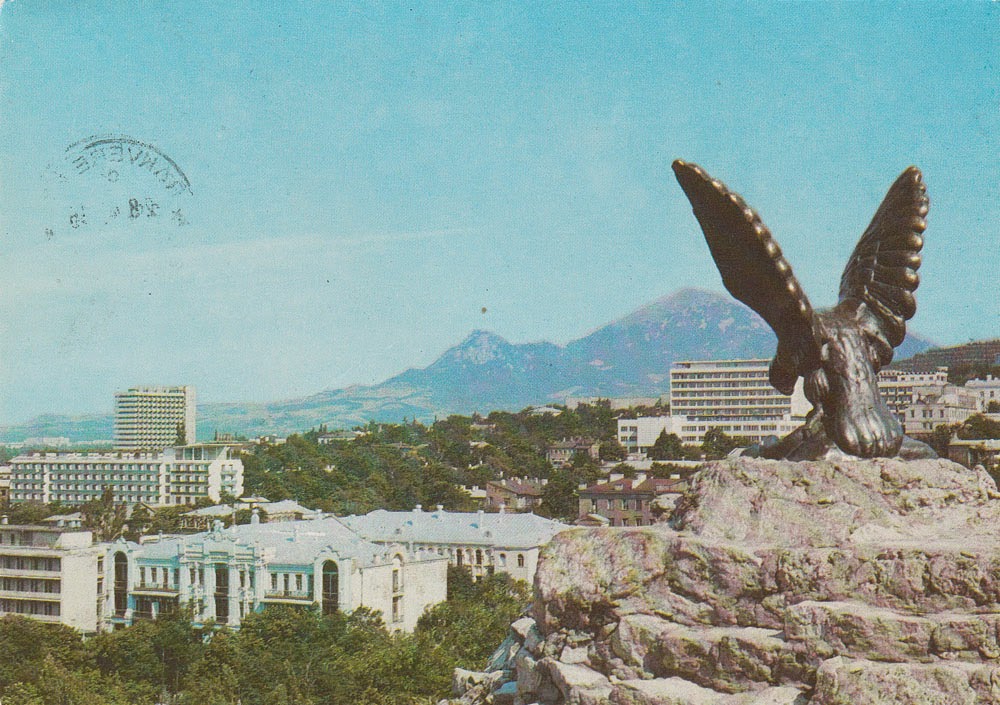 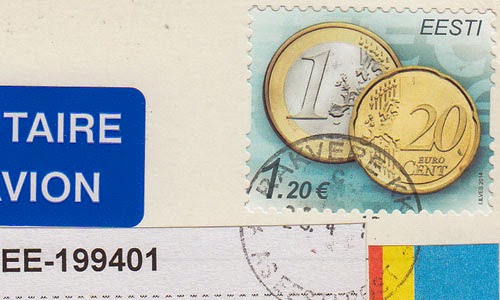 The card (33 years old) came from Estonia, but it shows the Russian town of Pyatigorsk. It was taken from sender's mother collection and the main element is the bronze statue of an Eagle with a Snake, the official symbol of the Caucasian Mineral Waters. This composition was made by sculptor LK Shodkim (Л. К. Шодким) for the centenary anniversary of resort opened at 1 May 1901. According to the author eagle represents the healing power of mineral springs, conquering the disease, which represents a snake in its claws. The original sculpture was made of cement, but in the past decade, the figure fell into disrepair, and it had to be restored. In 1973 it was re-cast in bronze on the Leningrad factory of monumental sculpture and installed in the same place. There are similar sculptures installed in all the cities of the Caucasian Mineral Waters: Pyatigorsk, Kislovodsk, Yessentuki and Zheleznovodsk. But Pyatigorsk eagle is perhaps the most beautiful and most famous among them.
The stamp (2014) was designed by Indrek Ilves> It shows two Euro Coins (1 and 0.20) and the interesting part is that their value correspond with the stamp value of 1.20 €.

Email ThisBlogThis!Share to TwitterShare to FacebookShare to Pinterest
Etichete: Estonia, other places, Russia 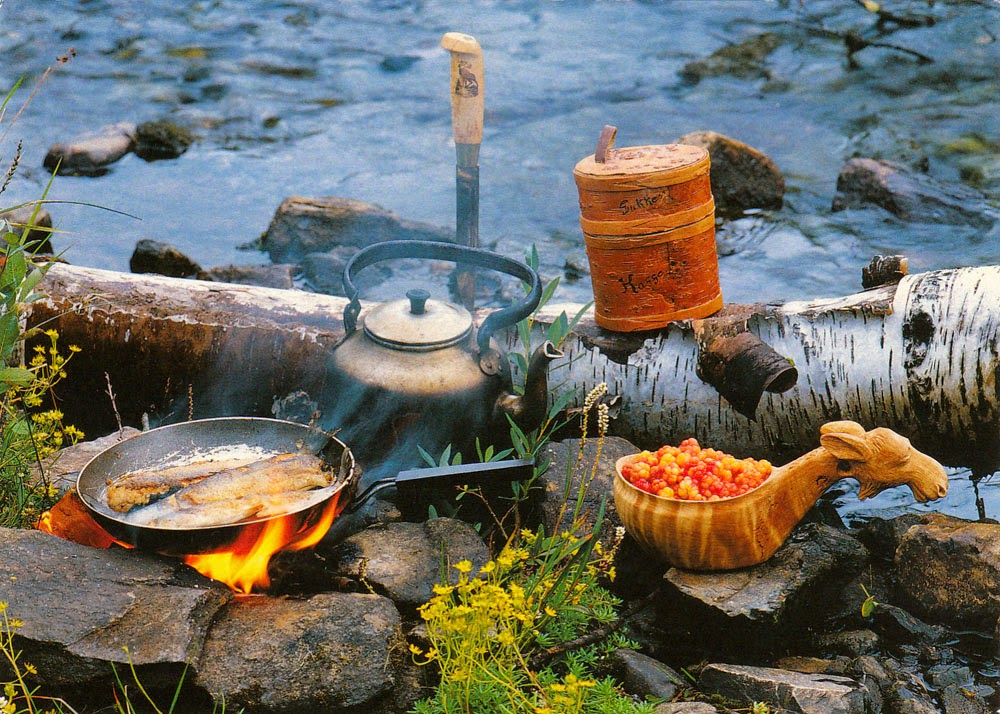 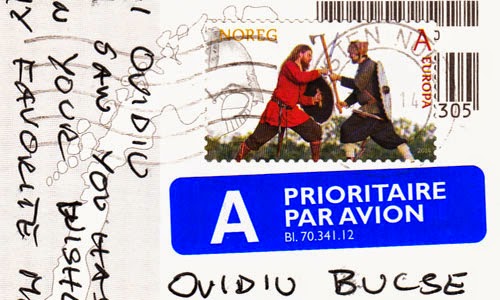 This postcard is quite old in my collection: received last year in November. Too many beautiful cards and only a tiny amount of available time to write about them. That's the sad part (if there is any) about Postcrossing, besides the fact that some of sent postcards did not make it to destination. But that's another story. This one was the fastest by far: 1 day.
It shows fried trout and cloudberries near a river, somewhere in wild Norway. Eaten by a bonfire on the spot where they were catched/found. It just makes you wish to be there, away from city's corroding fuss.
The stamp (ND 2014) is showing two viking warriors and is meant for European area usage. 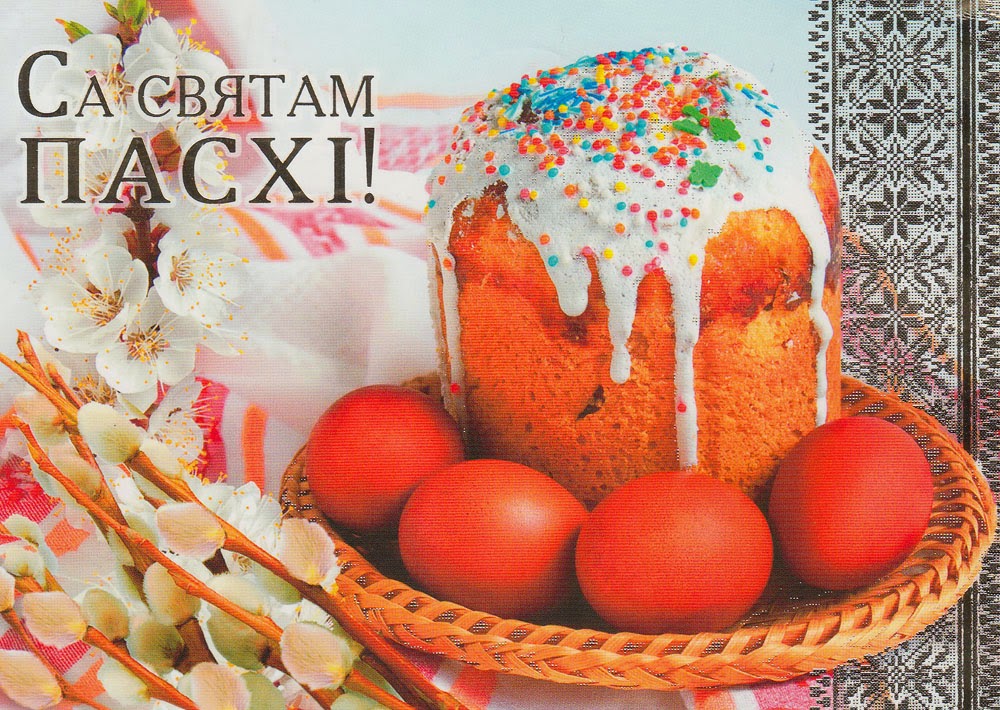 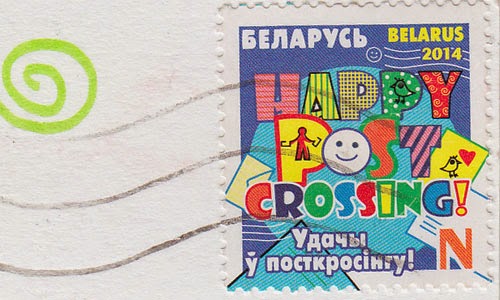 I know Easter has been gone for a while now, but I'm eager to post a few things about this postcard received in Holiday Card RR (E55/2). It shows a colored kulich (a spongy yeast cake that is traditionally baked for Easter Sunday in Poland, Belarus, Ukraine and Western Russia) and dyed red Easter Eggs, near a white blossomed tree and willow catkin branches.
The text "Са Святам Пасхi!" (which means Happy Easter in Belorussian) is written in golden color, the same used in the folk motive on the right.
The Postcrossing stamp (designed by Inga Turlo) was issued in 2014. The Letter N is equal to the surface tariff of a postcard abroad Belarus. More information about the stamp can be found either on Belpost site or on Postcrossing blog. 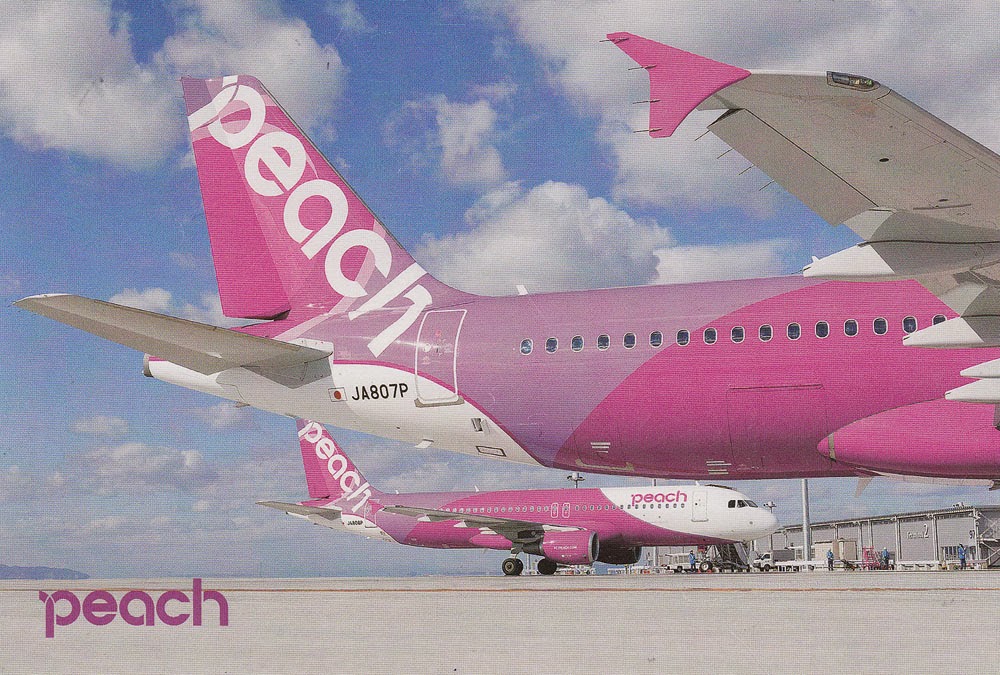 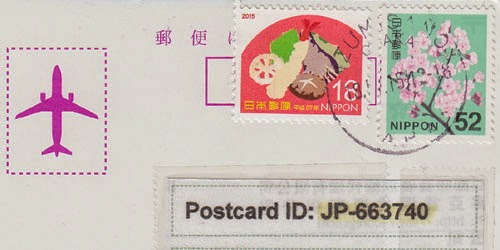 Yesterday I've received a very nice aviation themed card from the Land of the Rising Sun. Till now, I've never heard of Peach Avitation. They are a low-cost airline company founded 4 years ago, headquartered and operating mainly in Japan. Their fleet consist of 14 Airbus A320-214 aircrafts, two of them featured in the card (JA807P, in the closer plan).
The card came with two stamps and aviation-themed washi tape decoration.
The 18 ¥ (designed by Hoshiyama Ayaka) was issued this year and shows different food types from Japan.
The 52 ¥ (designed by Kaifuchi Junko) bears no year (but issued in 2014) and shows a blossom tree. 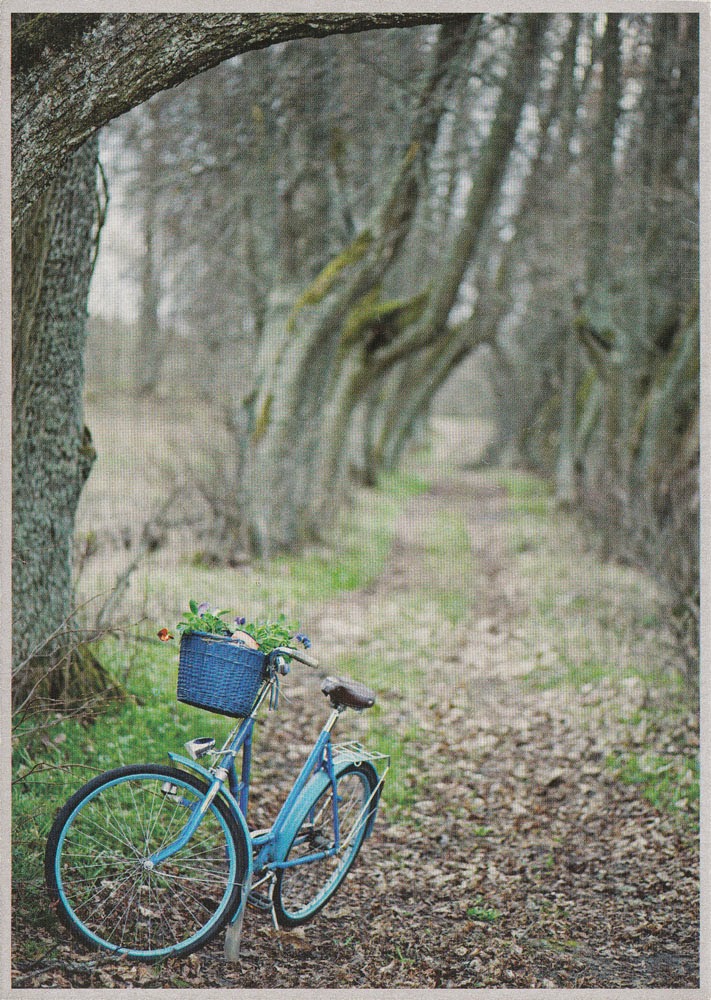 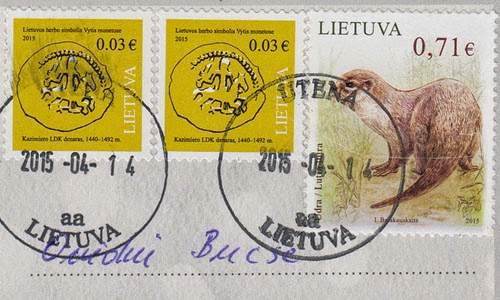 Another great card from Lithuania received in April Surprise RR. As you can see, the composition is quite simple: a blue girl bike under a tree on an autumn/spring alley. But enough to be a part in my bicycle & ski collection.
The stamps are from 2015.
The 0.03 € is a part of the set of the 6 stamps from the series Vytis, the Symbol of the Emblem of the Lithuanian State, feature Vytis found on various coins starting from denarii issued in the Great Duchy of Lithuania in the years 1388-1390.
The 0.71 € features the European otter (Lutra lutra) inscribed into the Red List of Lithuania (endangered species). 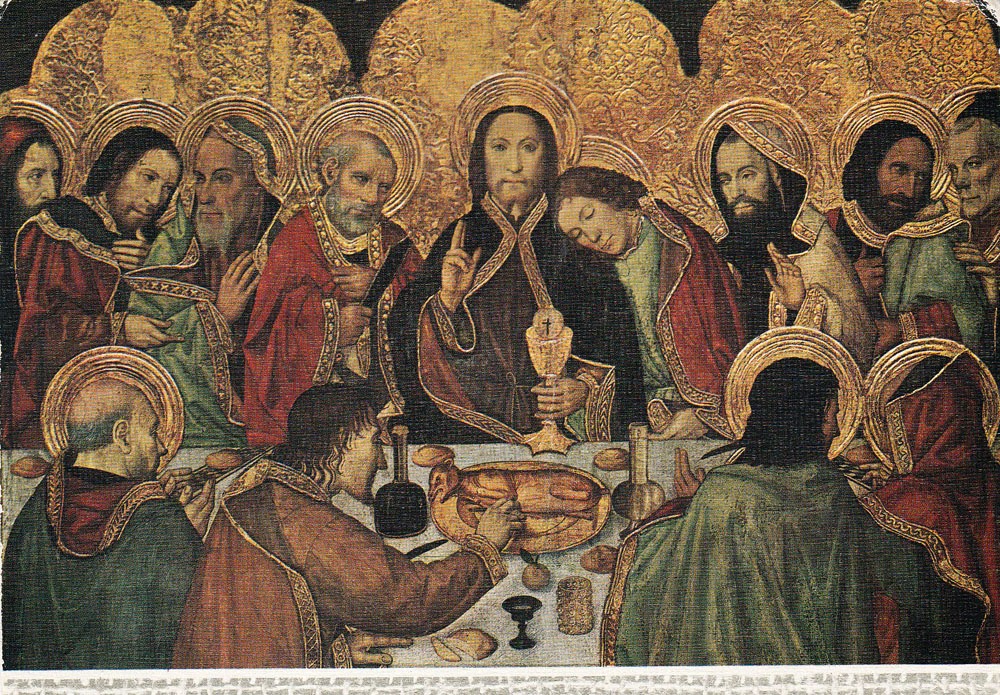 Orthodox Easter is very close now. Yesterday we celebrated Maundy Thursday so this card came quite in time, part of a specific forum RR exchange (Easter Cards - E56). The card shows one of Jaime Huguet's paintings called Santa Cena (or Last Supper). This was a part of an altarpiece, commissioned in the 15th century by the guild of tanners to be placed on the altar of the Augustinian friary of Sant Agustí Vell ("Old St Augustine") in Barcelona, Spain.
The stamps are Dutch, since the card was send from Netherlands.
The 2002 (ND) dark-rose shows a multiple NL text and have the value of 2 euro-cents.
The 2014 blue stamp shows one of Dutch symbols: a windmill, part of a bigger series similar to the one I've blogged about here.
The 2010 white stamp shows Middelburg buildings (part of Beautiful Netherland series) and have a value of 0,44 €. 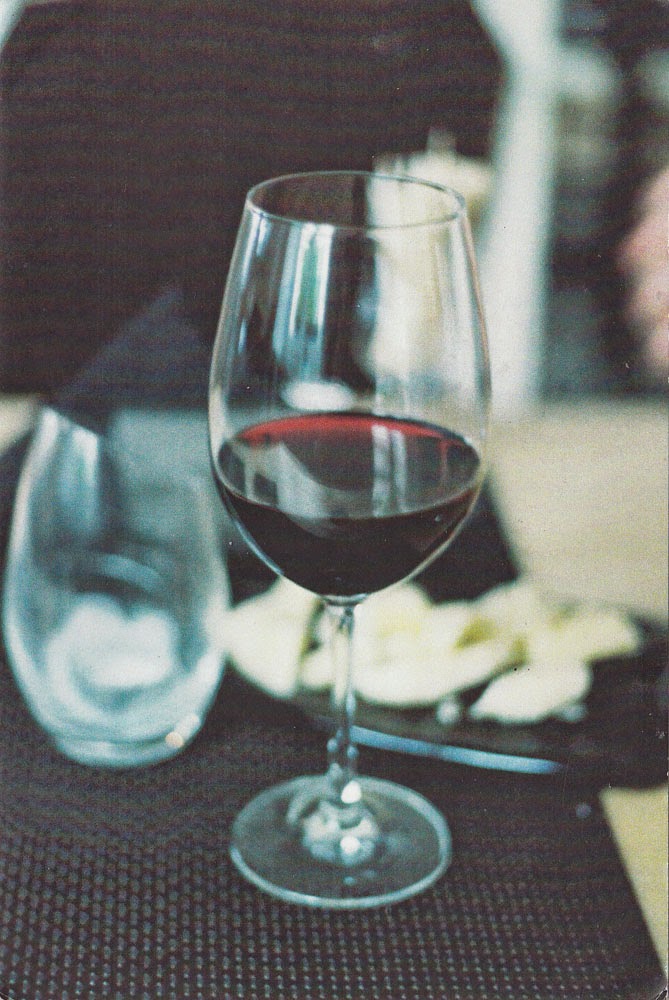 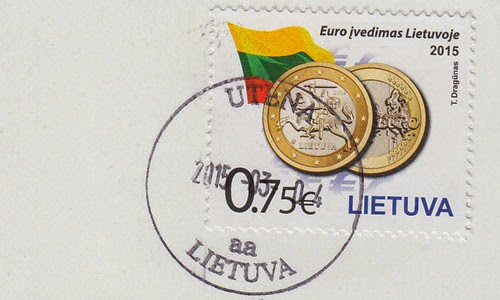 This simple, BUT great postcard came from Lithuania, as a surprise in March 2015 RR.
As I've seen from author's website, she prefers shallow depth of field, one of my favorites in photography domain.
The postcard came with a 0.75 € stamp (created by the artist Tomas Dragūnas) showing the new Lithuanian euro coin (2015) in front of the national flag. 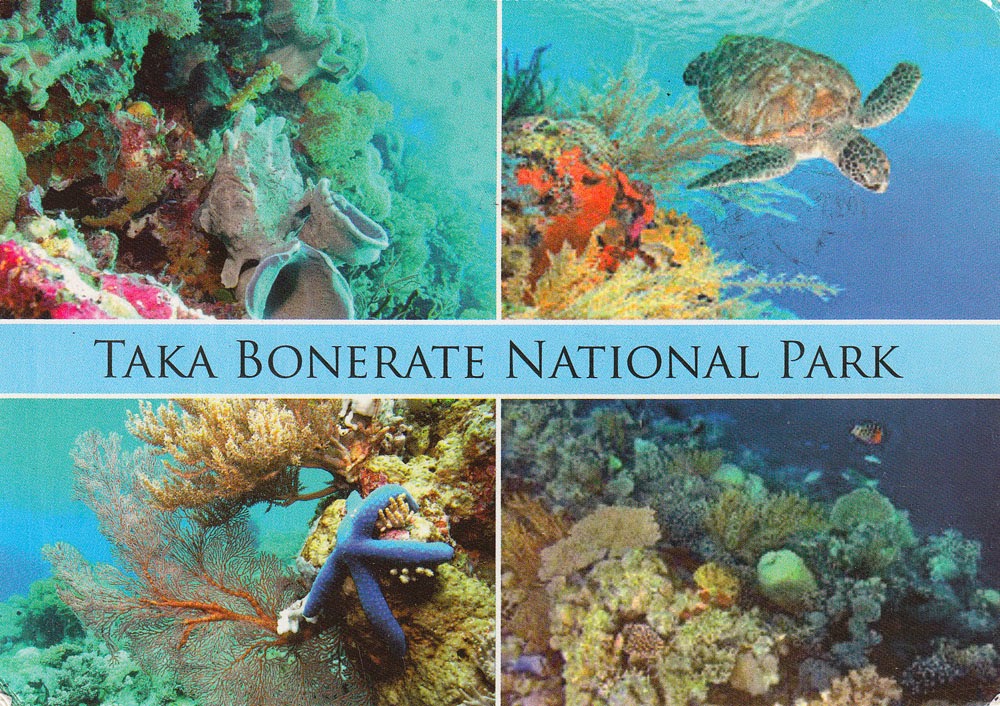 This is my first official card from Indonesia. It shows a glimpse of Taka Bonerate National Marine Park, included on UNESCO Tentative List (no. 2005). The National Park (made of 15 islands) is considered to contain some of the world's highest marine biodiversity. According to the Indonesian Department of Forestry the atoll has 261 species of coral, 295 species of coral fish, 244 species of mollusk and other species such as hawks-bill turtle (Eretmochelys imbricata), Pacific ridley turtle (Lepidochelys olivacea) and green turtle (Chelonia mydas).
The card came with two 2014 beautiful stamps:
The 5.000 shows the bridge of Kelok Sembilan (or Kelok 9), an amazing meandered road located 30 km east of Payakumbuh, West Sumatra.
The 3.000 shows a hawksbill sea turtle (Eretmochelys imbricata), a critically endangered animal. Underneath there is a special cancellation stamp (Jakarta, 05 November 2014).